Life is too short to stuff a mushroom! 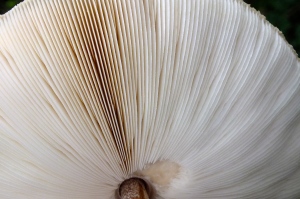 So said the glorious self-proclaimed ‘Superwoman’ who is Shirley Conran and I have to agree.  However, it is also true that if I live to be twice the age I am now I will never tire of stuffing mushrooms.

Oddly enough, as a child I was frightened to the point of being phobic of fungus. It’s called Mycophobia in fact and happily I grew out of it (except for a disastrous relationship with a man called Mike but that really is another story).  Who knows why I was so scared, but my evil older brother was quick to use toadstools to ward me off if he didn’t want to play with me. On one occasion, along with one of his best friends he trapped me in the narrow passage between our old wooden garage and the laurel hedge, dark and dank on one of those musty Autumn days, by luring me down to ‘see something amazing’.  I was about 5 so imagined a lollypop tree at the very least. They blocked the entrance as I ventured in to find the wonders of which they spoke, so that there was no escape when I came across the giant clump of festering fungus in my path.  I was found some time later, a gibbering, sobbing wreck by my father who presumably assumed I was playing quietly somewhere on my own.  I don’t believe in Karma so do not connect in any way the fact that the friend was later the sole British survivor of the Estonia Ferry disaster, with the torturing of an innocent by fungus.

Today I can be found happily examining the huge variety of fungi that we find out walking, photographing them and poring over our books to find out if they are edible.

In August, walking high above the Vallee de la Santoire in the Cézallier paysage of Le Cantal, we found the most enormous mushroom.  It looked like a pancake and was roughly the diametre of a big one.  We photographed it.  The following day, our young neighbour happened past with an armful of the same whoppers … I asked him if they were edible.  Oh yes, he replied – they are Coulemelle and they taste really good – especially the young ones.  His girlfriend (who hails from further south in Lozère) was later heard shouting down the phone to her mother ‘he’s brought me a load of enormous flat mushrooms …. what on earth do I do with them?’.  Despite the fact that I prefer not to be branded a nosy neighbour I listened intently and made notes.  On checking our book they get three chefs hats which is as good as it gets – the edible fungus equivalent of a big fat gold star.

The Bean gives scale to the beast

Coulemelle (Latin name Macrolepiota procera) grow a long stem with a distinctive frill some way up.  The young plant has a rounded cloche cap which eventually opens up into a large flat beret.  They look very sturdy but in fact they are delicate and on picking will quickly start to wilt underneath.  The gills (lamelles in French) are almost tissue soft.

When Two Brains arrived from the US for his present stay, we walked a walk I have not done for a year even though it is only a ten minute drive from home, on account of the fact that there is a kilometre stretch on the road and The Bean behaved deplorably the last time and had to be carried.  Low and behold on our way we found a Coulemelle.  Just one and quite old so we decided to make it into soup as instructed by those we had spoken too or evestropped on.  You can also include them in a stew the same sources reveal.  My first attempt at the said potage and I can report it was edible but the flavour so delicate as to be barely discernable and my choice of thyme to season overwhelmed the mushroom.  Overnight, though it developed and the second bowl at lunchtime the following day was improved if not memorable.  And we didn’t suffer any ill effects.  Which was a big hurrah!

A week and several walks later we hit the mother-load.  These little lovelies tend to grow on their own – or at least apart from one another, not in sociable clumps.  We found a baby all by itself and then in a barbed wired field taunting us, an adolescent and a fully mature stonker.  Two Brains hesitated but surcumbed to the look of longing on my face and braved the field like a commando seeking a hostage.  The Bean watched anxiously but mercifully beloved master returned unharmed and triumphant.

Stealthily sliding under the wire

Commando style across the field 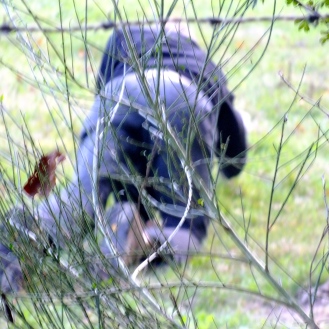 Return to the wire

The next day, a single speciment close to home and the cook-up was on.  The baby made a lovely omelette – and the curious thing is that the taste is stronger than their older siblings.  The big boys went into a soup thus:

So there you have it – my first recipe for virtually free soup.  We are no experts and as tempting as it is to go into a fungal frenzy we are taking one genus at a time and learning about it.  And we have our gloriously irreverant pharmacist to assist where necessary because this is France and that is all part of the Chemist’s service. 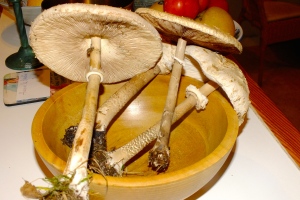 PS:  On the same walk we picked up a huge quantity of Chataignes (sweet chestnuts) of which more in a later post including some tasty recipes (assuming we survive the tasting) …