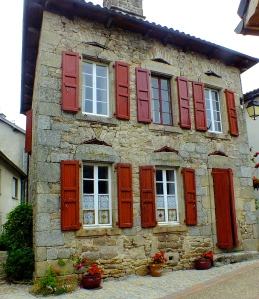 Actually, Julie Andrews, let’s not.  Start at the very beginning that is.  The fact is that this particular serial .. Oh! I feel the need to digress – I LOVE a serial!  All those wonderful adaptations that the British do so well – from The Forsytes, through The Pallisers, much Jane Austen, many Thomas Hardy’s and no doubt a glut of Dickens whose great works were written as episodes for a variety of journals, only later being published in book form.  This explains two things – firstly, why he serialises SO successfully on television and secondly the minute detail in his descriptives which can be the finish of many a secondary school student’s tolerance of his work …. his narrative can feel achingly slow to the modern reader  but gathers pace and impact on the screen.  Not so for everyone but I have carefully explained to four teenaged daughters and many attendant friends that he should not be dismissed as boring without giving the films and series a whirl first.  And it is not just a British phenomena – for instance Alexander Dumas serialised The Three Musketeers (Three Musky Queers as my first husband irreverantly and, quite possibly these days  illegally, always referred to them) in 139 episodes in Le Constititutionnel.

Back on piste … I do love a serial and this will be one.  But I can’t quite start at the very beginning for the simple reason that the story of finding and buying this place feels as though it should be a novel.  Based in the factual, it would be work of fiction with all players and places concealed and touched up with the clay and paint that an Author has the licence to apply at will.

So here it is.  We bought a village house that needs renovating in France.  Other’s do that too.  And they blog – I follow one in particular because she captivates me.  You can too, if you want to – just here.  So that’s not unique.  Where we bought it as English people is unique:  Marcolès: newly recognised as ‘Une Petite Cité de Caractère’  In fact only three villages in the entire Auvergne region currently hold this accolade and the award  was made to the three as recently as May this year.  But most important is what it is.

Looking at the picture you would be forgiven for thinking – nice but so what?  It’s a nice little town house.  In a village.  Somewhere in France.  What makes it special, if you will, is that it is a Monument Historique de France … gosh, wowy zowy.  Boom!!  But take a closer look and ask the question beloved of toddlers and indeed, I think,  the smartest people throughout their lives …. why?

The thing with this little baby is that it was originally built as the City Watchtower.  It is a tour médiéval  – this is what it would once have looked like in 1203 when it is  first accurately recorded: 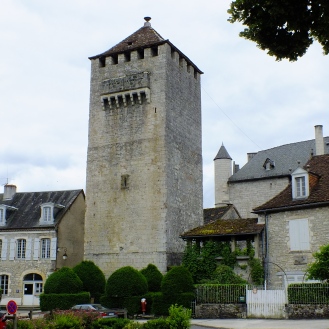 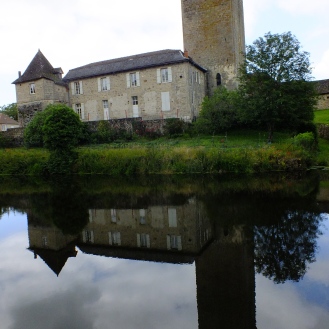 As a point of interest, all of these examples are within 50 km of our own village

Sadly the community of Marcolès was less caring then than it is now.  Or more accurately, I am sure, had other vital criteria for survival.  The tower fell into ruin and the stone was pillaged for other buildings.  However.  For reasons unrecorded (but we intend to do our darndest to trace and clarify), the village or perhaps just one villager, decided to rebuild it from what was left (and some other stone they found lying around).  And the result …la Maison Carrée.  For non French speakers, that means ‘The Square House’.  Which it is. It is also the only house within the city walls to stand entirely on it’s own.  Detached.  Reliant on no other.  As the locals charmingly put it – you can walk right around it.  Completed in 1830 it has been  inhabited by a variety of people including a very tall Russian lady who the present Mayor (Marcolèsian born, raised, elected and something of a saviour) remembers vaguely from boyhood.  I’m very tall and I love Russia and all things Russian (shoot me – I know its not de rigeur just now) … I rather hope I’m remembered too.  As someone who DID something for the Commune.  Gave something back, if you will.  My HB² of a Spouse feels just the same.

So here we are.  We have the house.  Without giving anything away we signed the papers for the purchase in March 2014 exactly a year from the start of the purchase …  but we didn’t get the keys til Christmas 2014.  Stick with me – Part Two is all about le vider.  No!  NOT the la vida loca! though translated as ‘Living a Crazy Life’ it could be apt in this instance. Vider means ‘to empty’.  You also use it when referring to gutting something prior to cooking.  Which is about right in this case.  It’s a whole story in itself.

PS:  I’ve called this series Coup de Cœur because it is the expression that French Immobiliers – those are Estate Agents to my UK readers, Realtors to those in the US (and apologies to everyone else) – use.   Coup de Cœur means a favourite thought that doesn’t cover it, really it is more something that pulls at one’s heart strings.  Immobiliers generally use it to imply an  irrisistible attraction to a house.  That overwhelming almost lusting for a place the moment you lay eyes on it, much less walk inside.  A feeling which doesn’t necessarily have either foot in the common sense field ….  which in this case, fits perfectly!