In chaos there is fertility 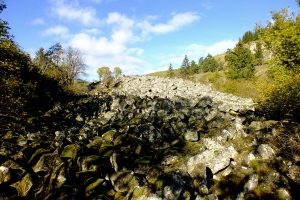 At various points in my life I have described myself as a ‘cat herder’.  Herding cats being, if you are idle enough to dwell on the issue, a thankless and almost impossible task.  At times it has been part of my job and at other times it has been part of my role as a mummy and surrogate mummy to whoever was clinging to whichever of my children (and there were usually multiple clutches of them) at that particular time.  I find that a combination of drill Sergeant Major and free-wheeling hippy chicky does the trick a treat.

In the summer of 2015 I was asked to reprise this role – to give a one off performance of ‘The Cat Herder’ to an audience of lightning fanciers and experts and interested amateurs from all over the world in Aurillac.  Aurillac is the capital (or prefecture) of Cantal and is known throughout France as the coldest town in the country.  This is because the weather girls and boys on all channels and in the newspapers always have the lowest temperature on any day listed as Aurillac so therefore it must be true … hold that thought.

The meeting was to last two days and HB2 and I plus The essential Bean arrived the night before and checked into our dog friendly hotel.  Not an issue since so many hotels are dog friendly in France and in fact most cafés and restaurants bat not the merest graceful eyelash at the dog dining with you.  Particularly tiny dogs like ours.   This makes The Bean  fully portable and no hindrance to our lives whatsoever.  Since we were eating en masse with the entire posse of delegates and organisers we left her snuggled in her basket dreaming of Bean things and enjoyed our evening immensely.

The following day I hit the ground hell for leather, checking everyone in, making sure those that hadn’t paid in full before the event opened their moth-eaten wallets and placed their owings in my ultra-efficient paw, setting up the refreshments and generally acting the part of the elegant swan to perfection.  Swans, we know, paddle frantically but invisibly and glide their impeccable glide with an unparalleled serenity.  Hold that thought too.

The fly in the ointment was the fact that this gleaming conference facility, the pride of Aurillac and contained in their Centre de Congrès had a large and prominent no dogs sign – one of those with an emphatic diagonal line through the offending pooch.  We asked if they really meant it.  For example most of the newly refurbished small airports in France have these signs but you will find there are hounds and houndettes strolling around unpeturbed in all of them – in fact The Bean is entranced with airports in France because she tends to be fêted royally by passengers, crews and sundry workers alike which she considers, quite understandably, is her right.   They did mean it.  They really, really did mean it so we had no choice but to leave her in the hotel with me running up and down stairs at frequent intervals and hightailing it to our staying quarters to air her.  Believe me this was not the plan – worrying about the dog whilst herding all these cats was unequivocally NOT the plan.     Unfortunately the might of Two Brains’ intellect was one of the star attractions of the show so he was required to sit and look brilliant and wise throughout all the presentations and ask pithy questions in English and French of the presenters.  Me, I’m just the tea girl.  I know my place.  Cast your mind back a couple of paragraphs.  Aurillac is the coldest place in France so leaving The Bean in the hotel room  was no more than a mere inconvenience, surely.  Except that it isn’t at all cold (well in winter it can be pretty nippy, downright chilly and even positively freezeling because it is in the mountains) … in fact the daytime temperature those two days hit 45°C (thats 113°F).  So quite warm.  Not thermal underwear weather.  Not knitted mittens weather.  Not even nylons weather.  And certainly not weather to have a dog cooped up anywhere and mostly not in a hotel room which unlike the conference facility did not boast even a ceiling fan, let alone air conditioning.  I have seldom passed such an anxious time.  We got through it, of course we did.  I found a little square round the corner with nice shady trees and took her to sit (and be fêted by sundry locals) every hour and I kept her watered.  I think brittle would be the best word to describe me as I herded those cats to perfection for hours on end back and forth to the restaurant for lunch and dinner, dolling out the refreshments which they seemed to destroy like a plague of locusts in minutes flat at every break and all the while smiling my rapturous smile, inclining my head graciously, gliding my silky glide, giving of my famed shimmy and schmooze and wishing I was somewhere else entirely.

The end of the conference, the end of the longest two days of my entire life,  was marked with a gala reception and the guest of honour was the fourth most important man in France.  The Mayor of Aurillac who has a particular interest in Science was also on the guest list.  And of course all the delegates from all over the world.  They were each presented with a lovely box of Cantalien goodies and the food laid out on the long tables looked achingly beautiful – salver after salver of exquisite bite-sized confections savoury and sweet, and the champagne on ice waiting to be poured by the equally exquisite and immaculately uniformed team of young servers their beatific faces never flickering from that porcelain expression that sits between inscrutable and the merest flicker of a smile and had clearly been drilled into them by the rather  forebidding and hawk-like bloke in charge.  I don’t think he had ever smiled.  I don’t think he actually had ever wanted to smile, for smiling surely would be a foolish fripperie and not something to waste ones life on when one had important functions to preside over and guests to skillfully intimidate if they fell short of ones exacting and giddyingly high standards – none shall pass but the most hallowed and they shall be obsequiously attended to and with aplomb so that all the lesser mortals need only look on and dream that they too might one day be so elevated.

We waited and we waited and we waited.  The tired delegates, most of whom were not French did not understand why we waited.  And to be frank neither did I.  I asked the hawk-eyed witherer and I swear he dessicated me on the spot with the most epically condescending yet oh so fleeting glare of my entire life and, lips barely flickering as he murmured his patronising finest, he explained that in France you cannot start proceedings until the guest of honour arrives.  And the guest of honour was the fourth most important man in France.  I went wearily downstairs with Ferdinand (a rather goat-like German who had been part of the organising team for reasons that escape me).  Ferdinand is a ladies man.  He flirted tirelessly and I ignored him tiredly.  Every so often I went upstairs to report that I had nothing to report.  We waited and we waited and we waited and, if I may be candid the heat, the lack of food (I had been serving refreshments, not eating them for that is  the Cat Herders remit) and possibly dehydration which would have certainly been rectified with a glass of bubbly but the bubbles couldn’t be popped without the all important presence of the fourth most important man in France.  I became silently hysterical and not a little delirious.  And then I spotted him.  A man on a bike weaving his purposeful way towards the building.  He dismounted and removed his bicycle clips placing them in the breast pocket of his, admittedly rather elegant whisper grey shirt and chained his bike carefully to the front of the building and smoothed down his undoubtedly snazzy designer black jeans.  I usually pride myself on picking up on clues.  This day my inner Marple had abandoned me – presumably a victim of evaporation brought on by the heat.  He entered the building.  I spoke up.  I admit I shouldn’t have.  Hindsight is not wonderful.  It is painfully embarrassing.  I asked him, with a little twinkle of irony in my tone if he might be the fourth most important man in France.  No, he replied.  I’m the mayor of Aurillac.  The ground failed to swallow me up and Ferdinand who up to that point had been an irritant became my hero as he swept the aforementioned and understandably disgruntled mayor up and took him up the equally sweeping staircase.  Minutes later Ferdinand reappeared and as if by magic, so did the enormous black car bearing two of  the most glamourous and chic women I have EVER seen in my life and the fourth most important man in France.   I remained stoically silent.  I may never learn but I seldom repeat the same mistake in the same evening.  Seldom I said.  Not never.  Fortunately this was a seldom night.  Ferdinand greeted the VIP and his entourage and then introduced me ‘this is Mme B – she’s the head  of diplomacy for the organisation’ …. levity has never been more welcome.

And don’t ask me who this fellow was … I never discovered.   He’s the fourth most important man in France – why on earth would I need to know more than that …. after all I’m just the Cat Herder and I know my place.

I offer you this little bauble as my entry to this weeks WordPress Photo Challenge titled Chaos and you can see all the other fabulous entries here. 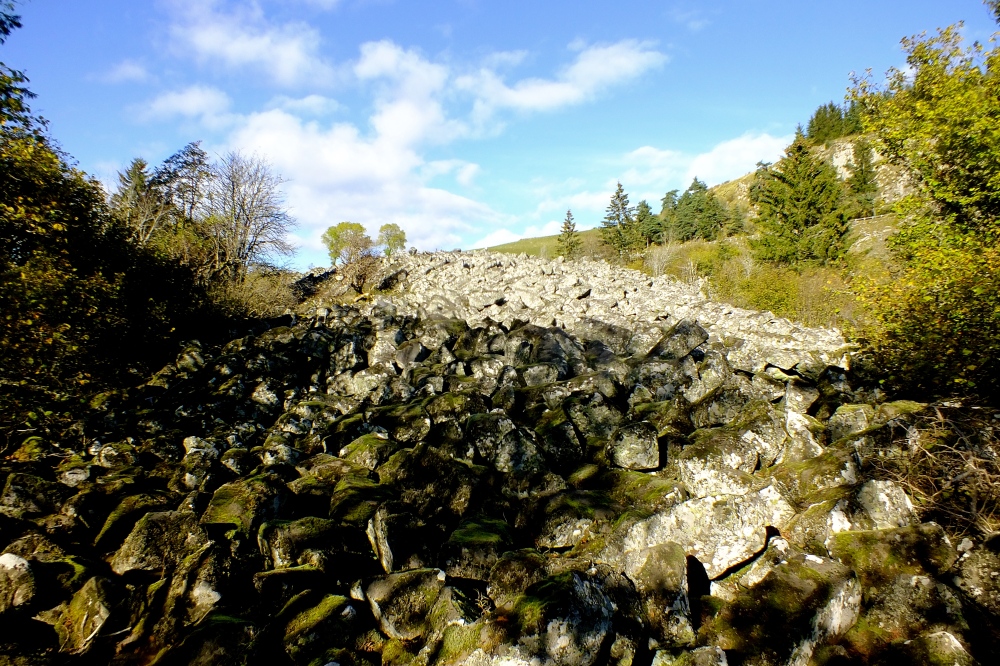 The compulsary PS:  You might be wondering given the story above why I have picked this picture of random rocks.  I have a logic.  The picture is of a Chaos Basaltique in Cantal …. the area is volcanic and strewn with reminders of that heritage in such formations which are left over when the basalt columns known coloquially as ‘Organ Pipes’ collapse and fling their broken pieces seemingly randomly in rivers of brittle rock.   I love stumbling on them.  This one is at Landeyrat and was the high spot of a most enraging hike two years ago.

The title comes from Anaïs Nin …. it appears in one of her umpteen journals – she was prolific, writing every day in volume after volume from girlhood until her death.   The chaos in the picture is fertile with plants and lichen and mosses so her words seem to fit nicely.  And I happen to agree with her … chaos can be fertile – as a seasoned Cat Herder, I should know.

Later, Osyth added this bonus in response to a question from a reader as to what a Cat Herder actually is: