Miles to go before I sleep

‘The woods are lovely, dark and deep’ … if you know who wrote the lines you have a clue to where I am and indeed the place that is now home for some time to come.  Fancy a guess? Leave a comment below and those of you who already know keep your council a while longer if you please.

The picture is in response to the Daily Press challenge to greet this nearly new year and titled ‘Circle’ – here are the other several hundreds of wonderful entries.

This place where I landed a week and a day ago has the most unimaginably beautiful light.  Gentle, pale, soft, benign and the reflection in the frozen pond of delicate sky charmed us as greatly as the ripples made static circles by the freezing puff of winters breath

Here, to make my test entirely untesting is the poem that gave me the line that seemed so apt to title this new chapter in my life:

Whose woods these are I think I know.
His house is in the village though;
He will not see me stopping here
To watch his woods fill up with snow.
The little horse must think it queer
To stop without a farmhouse near
Between the woods and frozen lake
The darkest evening of the year.
He gives his harness bells a shake
To ask if there is some mistake.
The only other sound’s the sweep
Of easy wind and downy flake.
The woods are lovely dark and deep.
But I have promises to keep,
And miles to go before I sleep,
And miles to go before I sleep.

‘Stopping by Woods on a Snowy Evening’

Oh swear not by the moon ….

‘Oh swear not by the moon, the inconstant moon that monthly changes in her cycles orb lest your love prove thus inconstant’.  So pleaded Juliet to her Romeo in the first demanding throws of their love affair, so brief but so eternal.  Change is all around us – creeping up on us in the dead of night and taking us over before we even notice.  Sometimes we do notice and we protest but mostly life is too encompassing and we let it be – like the moon waxing and waning and imperceptably altering but seemingling holding an eternal rhythm.  Everything changes, nothing stays the same.

The necessary PS:  The picture was taken in winter at Milhac not 10 miles from here … my husband goaded me that the moon was an accident.  It wasn’t – it was one of the first moments in my embryonic photographing life that I actually saw and shot rather than just shot and hoped for the best.  I bite my thumb at thee, HB²!

February was all about the snow here.  It came thick and thicker and The Bean snow-snorkelled through the soft stuff and danced niftily on the icy crusts of the more exposed drifts.  For me, it was the ministry of silly walks as I picked my way over the compacted stuff only to sink thigh high and have to heave my seemingly hulking form onwards (note to self … get some rackets).  We still have snow on the mountains, of course but it’s mostly gone lower down.  For now.  It’s only March and it may return.  The snow poles will stay where they are for several weeks more.  This picture was taken walking at Lac de la Cregut in a break between blizzards the vivid orange of the sign, all of a sudden given beauty by the monochrome pallet created by the snow and the sky, a lighter shade of grey before the clouds begin to tinge with yellow against pure lead ready for the next dump ….

PS:   The title?  Anthony Burgess,  ‘A Clockwork Orange’ – slightly more than tenuous but I like it.

We have lots of volcanic lakes here (and ponds and bogs too which the brown signs declare with particular promise though to be frank they probably aren’t exactly dramatically arresting to the untrained eye – which includes mine.)  Lac de la Cregut is a favourite spot for a walk for The Bean, HB2 and I or just The Bean and I when we are sans les cerveaux (without The Brains).  This weekend Bean and I visited with daughter number one and the snow was deep – around knee on me and The Bean had to body surf in the deep tracks made by our cumbersome steps.  The lake is frozen – still, iced, mysterious in her winter slumber.  Still waters with secrets beneath.

What good is the warmth of summer

Living where I do, the winters are measured on a scale of cold to bitterly cold but when the sun shines, no matter what the actual temperature I feel warmed.  This picture was taken on a cold day in early Spring when our breath froze as it hit the air, the trees were bare of leaves and the snow still iced the high peaks ahead of us.  And yet I feel its warmth and as John Steinbeck said ‘what good is the warmth of summer without the cold of winter to give it sweetness’.

So there you have it, my offering for The Weekly Photo Challenge entitled Warmth.

I used to be Snow White, but I drifted ….

Twinkle.  Nature twinkles all the time.  The water, rushing pell-mell over rocks, sparkles in the sun; the leaves dripping with frost gleem outrageously as my breath freezes in the early morning and the grass wet with dew glistens to greet me on warmer days.  But I love this line from Mae West, and we have snow on the high ground aplenty, and its nearly Christmas, and I’m dreaming.  So here is my picture of snow drifting, twinkling down to the Lac de la Cregut in December.

You want the moon? Just say the word ….

In my quest for discipline and structure I have now decided to join the Weekly Writing Challenge.  This week, by the skin of my teeth the subject is Irony.

Let me tell you about the duvet situation – We have one of those adaptable popper-together-clever duvets.  It means we can sleep comfortably in all seasons.  I bought it when I lived in a balistically cold farmhouse and winter set in.  It is stuffed with Hungarian goose down which makes it light and pliable to snuggle into.  When we moved here it was summer so we put the lightweight cover on our bed and the heavier one on the guest bed (it is the only duvet we possess and of course we intended to buy another but so far … well, so far, we haven’t).  Now we are entering our second winter and winter is winter here in Le Cantal.  Snow is guaranteed above 700 metres and we expect some by the end of this month.  But guess what?  The winter duvet remains on the guest bed (and we expect guests during the winter) and the summer one is on our bed meaning that my night attire is less allure and more velour.  The siren Two Brains married only 16 months ago is a distant memory as I pore longingly over catalogues of thermal bedsocks.

The duvet dilemma got me to thinking about things that people will consider normal but which are infact ridiculously ironic.  For instance that dinner service.  The expensive one you lusted over – perhaps your friends and relatives gave you pieces as wedding presents or perhaps you treated yourself and knocked a hole in your bank balance which took a long time to mend just because you could and you wanted to.  Either way, it sits in the cupboard to maybe come out for high days and holidays whilst you use the cheap stuff which you don’t like so well, doesn’t match and doesn’t send that little thrill through you when you look at it.   Or your best shoes – the ones that you only wear for hatchings, matchings and despatchings and are scuff free as a result of never having been worn but for the same reason are acutely uncomfortable and when you do put them on you crave, after a while, the old pair that is falling apart but which actually fits your foot like a foot-glove.

Now, before you think I am insulting your intelligence, let me tell you that I have the most wonderful example of irony straight from house of Two Brains.  Settled?  Let me begin.

There is a special place in Hawaii where there are many observatories.  It’s called Mauna Kea.  It’s a volcano and it divides the ‘Big Island’ into sunny side and rainy side.  The air is clear and bright and the stars, well the stars shine like you will probably never see them shine, even in a heavenly place like Cantal which is also clear and bright but just not so high and mighty.  One of the observatories is the SMA (Submillimetre Array) and Two Brains is its Director.  Some while ago the combined boffin power of the force that drives the SMA decided to invest in a new Receiver Set – one to be put in each antennae (there are 8).

These receivers would work at the shortest wavelengths.  They were cruelly expensive, costing the sum total of all the other Receivers used in the Array combined.  But cruel as the cost was, the atmosphere is crueller – it turns out that the shorter the wavelengths the more signals are absorbed except in a totally crystal clear atmosphere – and that, as Clever Hans would tell you is like finding a needle in a haystack – possible but not at all probable.   They tried and tried and in the end, after much head scratching they decided to let go.  So the most money was spent on the most useless equipment.  And if that isn’t ironic I don’t know what is.  But let’s face it – for us mere mortals who beat ourselves up about spending too much on a food mixer only to find that a hand whisk is just as functional and less time consuming to put together and wash, it’s a teeny bit heartening too. 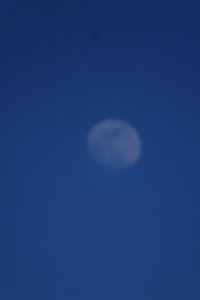 PS:  The title comes from my favourite movie ‘It’s a Wonderful Life’ … “You want the moon, Mary – just say the word and I’ll throw a lasso around it” – amongst all the ironies in my life the real irony is that it is wonderful when I care to stop and look …

I love you straightforwardly without complexities or pride

‘Minimalist’ is the title of the Weekly Photo Challenge.  And for me it is a real challenge – an everyday challenge … I have a daily notion that I would like to lead an uncluttered life and yet even clearing my mind often seems to be an impossible hurdle.

This image, taken on a deep winters day between Mauriac and Riom es Montagnes in Le Cantal of a tree naked and stark against it’s monochrome background was captured in full colour, not edited and yet has the purity of a black and white.  Perhaps winter should be the season to rehearse my inner minimalist …

PS:  The title is from Pablo Neruda (Poem XVII – I Do Not Love You)