The occasional series of stories relating to our relentless quest for the perfect house continues ….

I used to remark that I had to kiss a lot of frogs before I found my Prince.  The same principle seems to apply to our search for a maison principale in France.  We actually began looking three years ago and due to my emphatically stated obsession with towers and turrets, were drawn to the idea of finding a place with Rapunzelling potential.  Up sprung a perfect peach.  The right amount of land, a decent sized but not over-humungous house and vaguely in the right location.  That is to say it was in le Cantal.  Our departement of choice.  We have since revised this rigid proviso but at the time refused to countenance anywhere else at all. 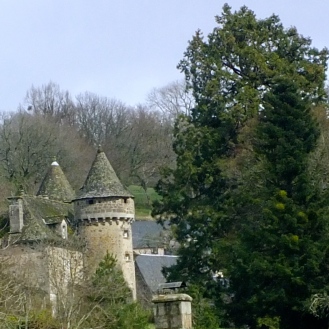 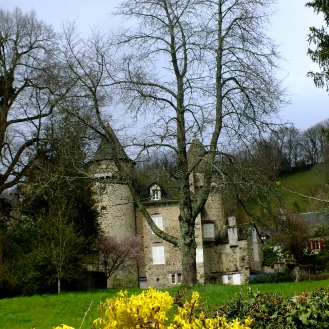 These are all houses I wish were for sale, sadly none are but I can dream …..

One fine and sunny morning we set of to rendez-vous with an immobilier underneath one of the many viaducts that pepper our area.  The house had been described as being in St Saturnin.  At a stretch you could accept that conclusion but as we have since discovered, estate agents are deliberately vague about the accurate whereabouts of property they are selling for fear of a sly deal being struck behind their back.  The car window lowered, an arm materialised and a piece of paper was thrust at us and we signed it.  This is normal practice here (the signature, not the disembodied arm) – you are acknowledging that you viewed the house with this agent and therefore should you wish to buy it, they are entitled to the commission on the sale.  Actually, quite often, the agent will not technically have been instructed.  They will have hoovered the property from one of the many property marketing websites and will have spent some time tracing the owner and pursuading them that they have an interested buyer and enticing them with promises of the worthiness of the said buyer and their bulging pockets and desire to buy this and only this house in the whole of France eventually hitting the jackpot of being allowed to introduce the buyer to the house.  It is all rather fragile and nervous and smacks of men in grubby raincoats, with numerous pockets filled with contraband nylons. 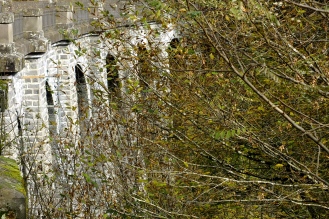 We set off behind the rather feisty and over-painted lady realtor and nearly lost her as she hurtled into the distance and turned abruptly  up a steeply rising and very twisty little road.  Several twists and turns later she again did a hand-brake turn and tore down an even narrower lane before screeching to a halt and getting out of her car.  This was our first glimpse of the whole person and it came as a relief that she was indeed a whole person and not just an arm armed with pen and paper.  We proceeded calmly and sedately behind her and eventually reached the same point.  These days I like to think I drive rather more confidently but this was a year before we moved to the area and we were cautious.  Very cautious.  In fact a casual observer might even have mistaken us for a teeny bit scared.  Wearing an unfeasibly tight skirt and jacket combination that gave her slightly dumpy figure the appearance of an overstuffed cushion and on tottering heels, she asked us to follow her through the gate and then stop whilst she got back out and shut it.  We offered to walk up the drive but she would have none of it presumably because the heels (they are called  talons  in French which is highly appropriate) were entirely unsuitable for walking on anything but the flattest surfaces and certainly not this predictably pitted and potholed driveway in the middle of no-where-land.  She bounced and bumped at some speed ahead of us and I had an unfortunate image of her plumptious form bursting forth from its upholstery and wondered how on earth we could reasonably repair her should she actually explode.  We continued to drive in our discreet and dignified manner.  The drive was moderately long and graced by a few trees and flanked by a  field, home to two horses of the local genus with their glamourous flaxen manes and glossy coats the colour of rich scandinavian polished pine.

And there was the house – Rapunzelling Tower to the right and a hefty  front door.  Out of the front door came an extremely slender, delicate to the point of fragile, lady clearly flirting with a  certain age and looking frankly rather suspicious.  I hoped we were actually in the right place.  She pulled herself together and extended a tenuous hand.  I had the overwhelming impression that she didn’t really want to shake anything let alone our hands.  She managed the most ephemeral of touches and immediately turned away, limply beckoning us to follow her in.  As we did, this nebulous illusion of politeness was shattered.  By her dog.  Her enormous and very boisterous dog.  Her entirely uncontrollable dog.  Her dog whose black and wild coat matched his mistress’s hair which was also deranged, pitch-dark and seemingly too big for her head.  Her dog who was very, very eager to show us his home.  Actually, it was a second home.  She is Parisienne.  The house was inherited.  And she didn’t really want it.  Inside this was abundantly clear.  It was a curious place.  The ground floor consisted of a giant room with one small window appearing even smaller by virtue of the thickness of the stone and a huge fireplace, off which lay a small dark kitchen tiled very expensively and highly inappropriately, the shiny nauseous green arguing loudly with the original flagstoned floor which extended throughout.  It was a space devoid of any softness and indeed any natural light. The tower had been turned into a boiler room and didn’t feel in the slightest bit romantic.  Upstairs were four of the largest bedrooms I have ever seen, one of them altogether empty except for an ironing board and piles and piles of clothes clammering to be rendered perfectly pressed.  The fifth bedroom was devoted to a vast wardrobe of  apparel presumably because the dog regularly towed her through undergrowth, streams and mud wallows necessitating many changes of costume each day.  She walked round behind us vainly trying to control the canine.  It was clearly a fun little private game.  I jest.  She was clearly deranged.  One room had a bathroom in the tower.  We didn’t make it to the top floor – she appeared extremely reluctant to allow us to see it and jarring estate agent lady looked acutely forbidding when we suggested that we might like to.  All my dreams of sitting in the tower letting down my hair were being systematically exterminated and the dog was apparently growing bigger by the minute.  And more boisterous.  Flakey Parisienne was clearly feeding him sneaky steroids.  I on the other hand, rather than feeling inflated, was punctured and rapidly deflating and feeling SO unwelcome, went out to the garden.  The views across from the Plateau de Cezallier to the Plateau de Limon are spectacular.  I didn’t actually know that was what I was looking at at the time, but I have since grown to know and love it.

As we made our dignified exit, we could see the dog dragging it’s  evidently certifiable and, by now virtually airborne owner enthusiastically across the drive, their twin hair flapping and waving in formation and the fleshy disembodied tightly clad arm of the be-taloned estate agent regally waving from it’s car.

Later that day, lunching with friends, they remarked that their research via Philippe (all our friends are called Philippe) in the next hamlet to the house had revealed sinister goings on with the farmer next door.  I idly wondered if that was the reason Mme Looby-Loo de Paris had looked so startled and alarmed at the thought of us going up to the attic ….

Of course we didn’t buy the house and I revised my plan to nonchantly Rapunzel my life away.  For the moment.

PS:  The title is from ‘I See The Light’ which is in turn from ‘Tangled’ which for the uninitiated is Disney’s version of Rapunzel … indulge me, to utilise it thus amuses.